My 9 year old daughter has been going to Poekie Nook for nearly three years. She loves being there so much and is almost always the first in and the last out. There are so many things to love about Poekie Nook: the kind and engaging owner and her staff (including the tween/teen helpers!); the ease and flexibility of drop-in classes; the whimsical crafting space; the use of fine motor skills; the creative summer camps; and of course last but not least….the hand sewn stuffies and the pride that comes along with creating them! To learn more about Poekie Nook check out their website. Drop-in classes require a monthly membership fee, but no school days and camps do not. Hope to see you there!  ~Anna Davis. Feb 2020

Had a lovely birthday party here. They were so easy to work with and did a great job with the guests. The kids loved making little animals and playing with them when they were done. It is a warm and welcoming space and our birthday girl was over the moon. ~Cassandra Edwards Feb 2020

We feel so fortunate to have stumbled upon Poekie Nook. We signed up for a two hour trial and have been coming weekly since. Poekie Nook is a safe, relaxed, and creative space. The students have to work up to harder and harder projects allowing them to practice patience, planning, perseverance, and goal setting. Our girls are on the young side (6) and really appreciate the skill and company of the older girls. They are always excited to go to Poekie Nook!  ~Camille Bloom. Feb 2020

I’m writing this on my moms phone so I’m a kid writing this. I love pookie nook because from the first day I went in kindergarten I loved it they welcomed me with open arms. They taught me how to sew and now I sew better then my mom.  ~Rachel Phillips Feb. 2020 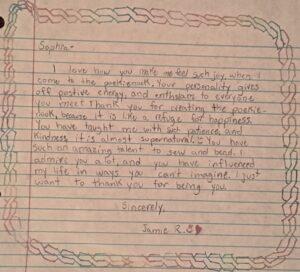 “The Poekie Nook is a place where children can learn to bead and sew by hand. But it is SO much more than that! The owner, Sophia, has created a rare and beautiful environment where children feel safe to be creative, make friends, and be valued for who they are. She offers a wonderful blend of freedom and structure in which children thrive. The pricing is very fair, the drop-off policy is incredibly convenient, and the creations that the children make are unique, beautiful, and very impressive. Quite frankly, it is my daughter’s home away from home, and I am so grateful for Sophia and The Poekie Nook!” — Abby, July 2014

“I have been working with Sophia for 10 years now.  I started going to sophia for projects when i was 5 years old and am now 15 and working for her at the Poekie Nook.  Sophia and the Poekies have always been a big part of my life not only growing up as a child, but as a learning experience now as an employee.  Sophia really cares about every single child that walks into her room and even, i have no idea how, is able to remember almost every single name of every child.  I loved working with Sophia and now for Sophia and if i could give it 6 stars I would.” — Kayla, July 2014

“Thanks for making me love sewing, because my wool gloves just tore and they are a Parisian necessity. I just sewed up the holes with zero concern or stress.” — Pavla, February 2014

“I thought I was dropping my daughter off at just another craft day care place, but I was wrong. Poekie Nook is a movement in the making and my 10-year old daughter was completely engaged in Poekie making for 2 weeks straight – including building a house for her new creations. Let’s Poekie!” — Dan, August 2014

“Though Poekie Nook is new to Mill Valley Sophia has been providing this tremendous service to parents and tremendous fun for kids for many years in Sausalito. My daughter, now 15, has been with Sophia for at least 8 years. Kayla has learned SO much about arts and crafts and now that she also assists Sophia part time she has learned responsibility and how to work with younger kids.

And Sophia is exceptional! She cares deeply about ‘her ‘ kids’, is provides firm loving guidance when the kids need some help navigating socializing with other kids. Sophia is very creative, patient, and devoted to the kids well being and to there having fun. The Nook is vibrant and engaging. There is always fun, chatty energy between the kids and with Sophia. And when a child is feeling down Sophia provides her experience, caring heart and considerable wisdom to help transform the moment.

As a working parent when my daughter was young Sophia and her Nook was a god send in knowing I can bring my daughter there and she will be held, have a lot of fun and learn a lot.

Oh, and beside being a really lovely person, she is also a teacher trained in the Waldorf method.” — David, July 2014

Here is a beautiful letter I received many years ago, when the Poekie Nook was still a part of my old business. All the names have been changed, of course.

“Poekie Power
Recently, I spent a morning at my daughter’s school flipping through books about pigs, rockets and an olive’s journey through the human digestive system. The books were written and illustrated by Kitty and her fellow second graders.

Each author had dedicated her masterpiece to an inspiring person in her life. Most wrote sweet tributes to their teachers or parents. Kitty’s dedication was a little different: ‘To Sophia, for letting me sew when Artsy Anny wouldn’t.’
I’m sure some found the dedication puzzling– her book was about cats, after all. But I got it.

In kindergarten, Kitty begged me to sign her up for Fuzzy Foxes, an after school sewing class. Since pre-school, she had a history of getting easily distracted, disrupting other students and exploding when she’s upset. I was leery of the sewing class, but decided to give it a shot.
The teacher, Artsy Annie, was an elderly, no-nonsense woman. She was accustomed to making antsy five-year-olds fall in line with a single stern warning or flinty stare. Then she met Kitty.
‘Your daughter really has a hard time following directions and sitting still,’ she greeted when I arrived at the end of first class.
Kitty avoided being expelled from the Fuzzy Foxes but continued to struggle. Artsy Annie had neither the time nor patience to help her. By December, while the other kids were whipping out fancy Christmas trees, Kitty was still fumbling with her simple pumpkin.

Hoping to find an activity she loved that would help boost her fragile self-esteem, I continued to sign her up for after school classes she was interested in.
She tried soccer but couldn’t keep up with the other kids. In the middle of kicking drills one afternoon, she stomped off the field and refused to go back.
Tae Kwon Do came next. I’d heard other parents rave about how it instilled confidence and self-discipline. Perfect, I thought. But when I discovered Kitty lolling on a pile of mats in a corner of the studio, a strip of duct tape plastered across her mouth, I realized you can’t reap those rewards if you lack the self-control to sit quietly and listen to the Sensei.Cooking, ceramics and drama were also unsuccessful. I was done with classes.

In desperation, I took Kitty to the Planet, and after school activity center near our neighborhood. Her eyes lit up when she walked into the cozy wood-paneled sewing room. Colorful hand-made stuffed animals — Poekies– filled the shelves. Sophia, one of the owners, sat at a big table, laughing and chatting with a group of girls as she helped them sew Poekies. She smiled warmly at Kitty and invited her to join them.

In the following weeks, Sophia helped my daughter master the whipstitch and backstitch. She praised her pattern-cutting technique and fabric choices. When Kitty got frustrated, Sophia gently got her back on track or sent her outside to cool off on the rope swing. The day she finished her first Poekie, a blue mouse named Sky, Kitty thrust it in my face.
“Look, Mama! Look!’ she cried, beaming with pride. ‘Can you believe I made this?’
I smiled and said it looked like it came from a store. I marveled at how far she’d come since her days as a Fuzzy Fox. A year and forty-some Poekies later, Kitty still loves sewing with Sophia. And her self-esteem is getting stronger.” — A Mother